Followed by millions of passionate fans from all around the world, the NFL, effortlessly captures the magic of sport week in, week out.

And never more so than when the underdog manages to achieve the impossible and take home the victory against all odds at Maryland sportsbooks online. Routine triumph comes and goes, but those heroic moments and memories are what stick with supporters for years to come.

With this in mind, we decided to determine which football teams are the NFL’s most persistent underdogs, and which manage to accomplish the unimaginable most often. While you won't be able to use a Caesars Sportsbook Maryland promo code on any this exact data, you might be able to utlize it for Heisman Odds bets, futures bets and more. Analyzing data collected through TeamRankings.com, we can reveal football’s biggest underdogs of the 21st century and the last decade. 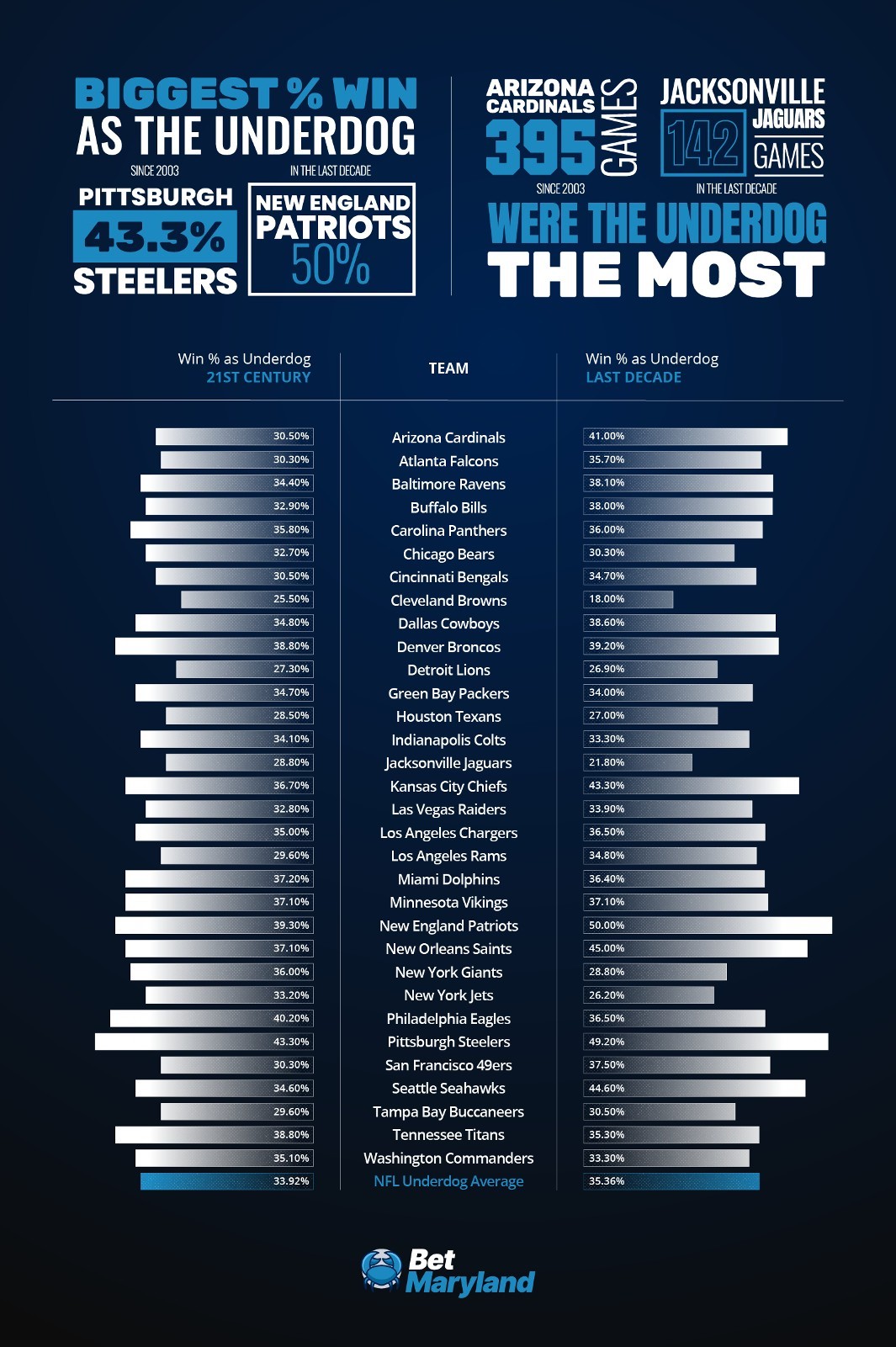 Comparing each NFL team over the last 20 years, we’ve been able to determine the greatest underdog stories of the 21st century and which teams are most often faced with a mountain to climb.

It’s a phenomenon that makes the sport so popular across the country; some NFL teams simply thrive as underdogs, pulling off a result despite not being given a chance. But which teams are best at defying the odds and claiming victory from the least likely of places?

With an astonishing 43.3% win rate against the odds since the turn of the century, the Pittsburgh Steelers are the NFL’s ultimate underdogs, closely following by the Philadelphia Eagles (40.2%), New England Patriots (39.3%), Tennessee Titans (38.8%), and Denver Broncos (38.8%). Incredibly, though, despite being positioned as underdogs, there are a whopping 10 Super Bowl titles among this group of teams in the 21st century alone — including five since 2014!

Which Teams are the Underdog Most Often?

Focusing our attention on the teams that nobody ever gives hope to, the Arizona Cardinals have played the most games as underdog this century (395), closely followed by the Detroit Lions (393). Meanwhile, the New York Jets, Cincinnati Bengals, and Super Bowl LV champions Tampa Bay Buccaneers round out the five most common underdogs of the 21st century.

At the other end of the table, the Baltimore Ravens are statistically the number one odds-on team in the NFL, playing just 180 games as underdog over the last couple of decades, with the Houston Texans (200) and New England Patriots (214) placing second and third, respectively.

Analyzing data from the last 10 years, we can reveal the best overachievers of the decade, as well as the teams that have faced the most games as underdog.

As far as recent over-performers go, our research reveals six-time Super Bowl winners the New England Patriots as the undisputed top-rated underdogs of the last 10 years, with an impressive 50% win rate when not the favorite. Placing second, the Pittsburgh Steelers are once again among the top over-achievers, winning 49.2% of their games as underdog over the last decade.

Meanwhile, the New Orleans Saints (45%) also rank highly, in third, with the Seattle Seahawks (44.6%) and Super Bowl LIV winner Kansas City Chiefs (43.3%) close behind. In similar form to the underdogs of the 21st century, the top five over-performers of the last 10 years hold a combined five Super Bowl titles.

Which Teams have been Underdogs Most in Last 10 years?

The Cardinals might be the biggest NFL underdog of the last 20 years, but in the last decade it’s the Jacksonville Jaguars who’ve played the most games as non-favorite (142). The Jags lead the way by some distance, having faced off against statistically better opposition 10% more often than next-placed Washington Commanders (130), who rank just above the Las Vegas Raiders (127), New York Jets (122), Miami Dolphins (118), New York Giants (118), and Cleveland Browns (118).

The top-rated football team of the last decade, meanwhile, having played just 28 games as underdog, is the New England Patriots. This is made yet-more impressive when you remember they’ve also enjoyed victory in half of these games!

With the Super Bowl just around the corner, will we see an upset in the greatest game of the calendar year? For information around how you can bet on the meeting, check out the latest over at BetMaryland.com.

Here Are the New Qualified Entries in Maryland Sports Wagering

Maryland Online Casino Bill Introduced But What Hurdles Are Ahead?

New Applicants Will Get Hearing, Vote at Thursday Meeting